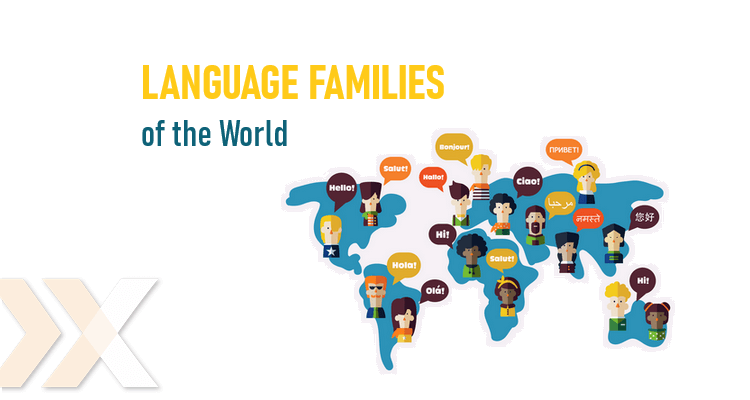 Today, we will discuss the mysterious field of linguistics called etymology – the study of the origins of words and languages. Examining these histories has led linguists to define several language families worldwide. But how are these language families classified? And do the terms “language family,” “language branch,” and “language group” mean the same?

What are language families?

Linguists discovered that, in the past, many proto-languages gradually morphed into the languages that are used today. Multiple modern languages could have originated from one proto-language and these languages form language families.

One of these families contains languages that share some vocabulary and grammar rules. For example, in German, “Wasser” is water, whereas in Swedish they use “vatten”. It becomes clear that these two languages are closely related.

Language families and their classification

However, we shouldn’t assume that all languages belonging to one family are as similar as that example might suggest. Based on how closely-related the languages are, language families can further be divided into branches, groups, and sub-groups, all the way to particular languages and their dialects.

To better understand this categorisation, let’s look at an example.

English and Slovak belong to the same (Indo-European) language family. However, they don’t actually share many similarities.

What language families are there?

We currently distinguish over 150 language families. Some are bigger and some smaller. The Indo-European family dominates Europe. Yet there are other well-known families around the world, such as the Uralic, Austronesian, Sino-Tibetan, Niger-Congo, Afroasiatic, and Austroasiatic.

This picture shows how these language families are spread across the globe:

Looking closer at the Indo-European language family, the most widespread in the world, reveals that it’s comprised of the following branches:

Armenian, Albanian and Tocharian also belong to the Indo-European family.

The most widespread language branches in Europe

The European continent is currently home to the following language branches.

All Slavic languages have their roots in the Proto-Slavic language. They are further divided into groups based on their geographical distribution:

English is the most popular Germanic language. But this branch also includes German, Icelandic, Dutch, Danish, Swedish and Norwegian.

All Romance languages stem from the same proto-language, Latin. Today, they’re spoken not only in Europe, but also in many American countries, too. This language branch includes Spanish, Portuguese, Italian, Romanian, Moldavian and Catalan.

This language group is among the least widespread. Surveys even say it’s slowly disappearing. It only includes three languages—Irish, Scottish Gaelic and Welsh.

Today, there are only two languages in this group: Latvian and Lithuanian.

There’s a special category of languages – the so-called isolates. These languages are so specific that linguists cannot fit them into any language family. For example, Basque and Korean are both isolates.

A pidgin is any language with vocabulary and grammar that are based on connecting two or more languages. Pidgins usually result from colonisation or the easing of communication when trading between different ethnic groups. Their simplified grammars mean that they often serve as international auxiliary languages.

If children begin speaking a pidgin language as their mother tongue from the cradle, then it can become a full-fledged language over time. This process is called creolisation, resulting in what’s called a creole language. Some of the most famous creole languages are Hawaiʻi Creole English and Tok Pisin, a language spoken throughout Papua New Guinea.

« Your Favourite Translator Is on Holiday. What Now?
10 Strangest Languages in the World »
We've made some important changes to our Privacy and Cookies Policy and we want you to know what this means for you and your data.I acceptMore information