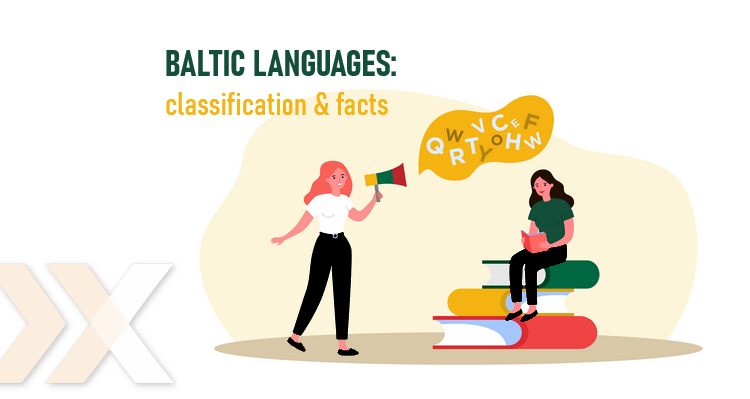 Baltic languages belong to the Indo-European language family and are quite unique in that most are no longer used today. However, they’re also the closest to Slavic languages, and they provide a rich source of historical information for scholars.

Baltic languages can be found throughout Northern Europe, east and southeast of the Baltic Sea. Baltic tribes are thought to have lived in this area as early as 98 BC. However, the first Baltic language didn’t emerge until 1369. Subsequently, individual Baltic languages began forming gradually.

The reason for the late official emergence of individual Baltic languages is that the Baltic lands resisted Christianity for a long time. They were also relatively isolated from neighbouring countries and other external influences.

Fun Fact: Baltic languages are considered the most archaic of the Indo-European language family. For this reason, they attract many linguists, allowing them to investigate the Indo-European proto-language and its evolution.

However, the Baltic languages also include unclassified languages that are currently considered extinct. These include Selonian and Semigallian, or dialects of Old Prussian. Additionally, we also know of the Nadruvian and Skalvian languages.

This group consists of three languages – Latvian, Lithuanian and Latgalian. It also includes three extinct languages that have yet to be studied in depth – Semigallian, Selonian and Old Kuronian.

Lithuanian first appeared in printed form in 1547. Today, it is an official language of the European Union. It is also the most widely spoken Baltic language, with approximately 4 million speakers in total, including 3 million native speakers. It is unique in that it contains a very large number of archaic expressions, and it retains many characteristics of the ancient Proto-Indo-European language.

Latvian is slightly younger than Lithuanian, first appearing in printed form in 1585. It is the official language of Latvia, spoken by approximately 1.5 million people. Latvian uses the T–V distinction. Its vocabulary is almost free of vulgarisms, which is why it’s considered a formal and polite language.

Did you know that… The vocabularies of Latvian and Lithuanian are distinct, and thus not mutually intelligible? This is due to the high number of foreign words that have entered the languages from their neighbouring countries.

This language is spoken in eastern Latvia, and many consider it to be merely a Latvian dialect. It uses a large number of archaic expressions.

This language used to be fairly widespread. In the 13th century, Old Prussian was written using the Latin alphabet, but very few written records have survived from this period. However, by the end of the 17th century, the Prussian language had almost completely disappeared. This was largely due to the Russian Empire, which dominated the Baltic countries for a long time. The Russians forbade the use of existing languages and alphabets, and the inhabitants were forced to adapt.

Galindian is an extinct language of which only very little information has survived. It was spoken by the Galindian people and appears to have shared many characteristics with Old Prussian.

This now extinct language was spoken by the ethnic group of Sudovians, also known as Yotvingians. Therefore, it’s occasionally referred to as the Yotvingian language. It’s estimated to have fallen out of use around the 17th century, similarly to Old Prussian.

Baltic languages conclude our series of articles on language families. If you want to learn more exciting facts about other languages, let us know in the comments.

« Romance Languages: Characteristics and Categorisation
We've made some important changes to our Privacy and Cookies Policy and we want you to know what this means for you and your data.I acceptMore information