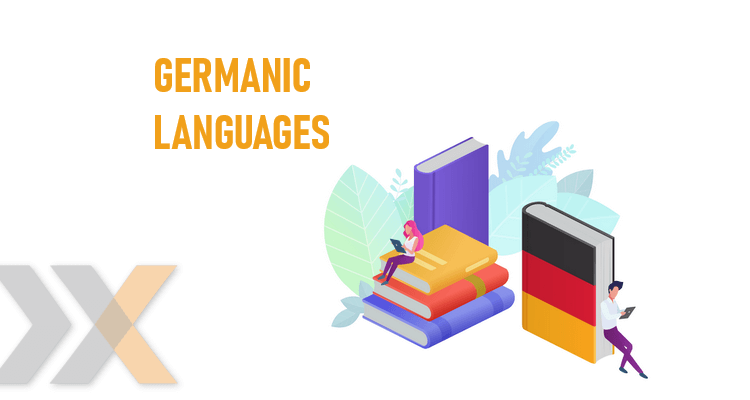 Reading time 3 minutes
Germanic languages belong within the most popular language family in the world. What languages belong in this branch, what makes them special and what should you know about them?

The Origin of Germanic Languages

In a previous article, we introduced you to the concept of language families. Germanic languages are part of the Indo-European language family, which is also the most widespread globally.

This branch began forming in approximately 2000 BCE. Yet we don’t really know how the respective languages developed, as they don’t share any one protolanguage. Linguists suppose that at first they started evolving independently, and only then did they begin sharing similarities.

Germanic languages are spoken across quite a large part of Europe.

When people hear the term, they automatically think of German or English – the mother tongue of over 300 million people. But the Germanic language list is much longer, and most can be heard in Europe.

Today, we distinguish approximately 15 officially recognised Germanic languages. However, linguists have difficulty determining which languages can be considered fully-independent, and which are only dialects. This is because there are very close relationships between individual Germanic languages.

Generally, this language branch is divided into three sub-groups, with each one distinguished primarily through demography.

You may have never heard about this branch, as it it’s exclusively comprised of extinct languages: Vandalic, Gothic and Burgundian.

On the other hand, this branch is the biggest one among Germanic languages – both English and German belong here. Moreover, German can further be divided into High German and Low German languages, most of them being extinct or only remaining as dialects. In addition to standard German, Low German is still commonly used.

Next in the line of West Germanic languages are Dutch, Afrikaans, Frisian, Yiddish and Luxembourgish.

As the name suggests, these languages are spoken in northern countries. They’re also occasionally referred to as Scandinavian languages. These are Swedish, Danish and Gutnish. Additionally, this group includes languages used on northern islands: Norwegian, Icelandic and Faroese.

There’s no single Proto-Germanic language that developed into the individual languages that we know today, so linguists initially struggled to define which languages would belong to this branch. Ultimately, they decided to base their choices on similarities. Many similarities when you start comparing frequently used words in respective languages.

To demonstrate, we’ll use the word “book” in each Germanic language:

All of these shared similarities make it easier for people learning new Germanic languages. For example, once you’ve mastered English, it’s much easier to learn German, Danish or any other Germanic language.

There are many interesting facts about this language branch.

The Most Spoken First Language in the EU

Did you know that English is not the most spoken first language in the European Union? It’s actually German!

Norwegian stands apart in that it isn’t unified. There are four different forms with distinguishable differences:

Each of these is accepted in formal written and spoken communication. Typically, you’ll encounter (the regular version of) Nynorsk and Bokmål. These are also taught to people who want to learn Norwegian.

A Language Without a Written Form

This sounds strange, but it’s true. We’re talking about Swiss German, which is more a group of dialects than a singular language. There are differences in Swiss German across regions, so there’s no written form of the language. This is all well and good until somebody orders a translation.

Make sure that you don’t confuse Swiss German with Swiss Standard German!

Some words in Germanic languages are long and seem impossible to pronounce. At this point, many people would point at Germany. But the longest commonly used words actually come from Swedish.

Give this one a try:
Spårvagnsaktiebolagsskensmutsskjutarefackföreningspersonalbeklädnadsmagasinsförråd-sförvaltarens.

Curious about what you’ve just said? This word means “[belonging to] The manager of the depot for the supply of uniforms to the personnel of the track cleaners’ union of the tramway company”. People don’t likely walk around Stockholm saying this word at every corner, but somebody must use it sometimes. ?

« Who Is a Vendor Manager, and How Do They Help Translators?
Language Skills and How to Write Them in Your Resumé »
We've made some important changes to our Privacy and Cookies Policy and we want you to know what this means for you and your data.I acceptMore information