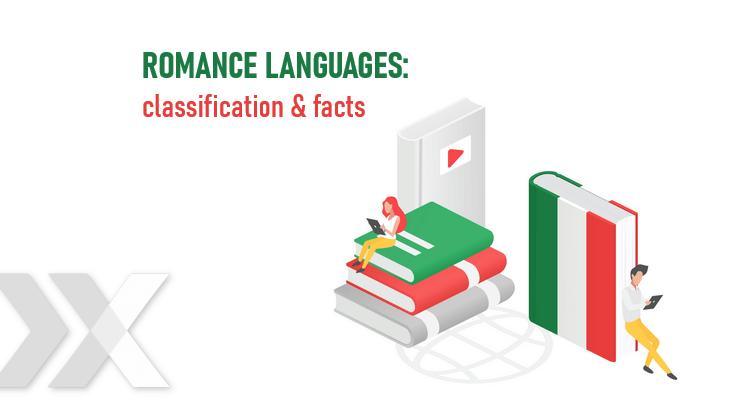 Romance languages are widely regarded as the most romantic languages in the world. They belong to the Indo-European language family and are spoken by over 800 million people worldwide. What interesting facts lie beneath their surface?

The Origin of Romance Languages

Romance languages evolved from Vulgar Latin spoken in the Roman Empire. This now dead language then spread to the far corners of Europe and, during the colonial era, even America and Africa. Its swift expansion birthed different dialects that formed the basis for individual Romance languages. Experts estimate that these began splitting from Vulgar Latin between the 3rd and 9th centuries.

Fun Fact: Even though Romance languages evolved from Latin, Latin itself doesn’t belong in the branch. Rather, it belongs to the Italic languages spoken in antiquity.

Romance languages are most commonly spoken in Southern and Southwestern Europe. They’re also significant in Romania and Latin America, having been introduced during colonisation.

Each Romance language’s evolution has been influenced mostly by surrounding countries. For example, approximately 66% of Romanian vocabulary derives from Latin. However, since Romania neighbours countries with Slavic languages, approximately 20% of its vocabulary come from these.

The Classification of Romance Languages

Categorising Romance languages remains a head-scratcher for linguists. Although the big ones are easily identifiable, it can be difficult to determine if the smaller ones are languages or just dialects. However, noticeable similarities exist between them. The languages of neighbouring countries share the most common features, and the growing distance also grows the differences.

Linguists assume that currently roughly 32 Romance languages exist. These are commonly divided into the following sub-branches.

Here we can find Portuguese and Spanish, as well as Catalan, Galician, Asturleonese and Mirandese.

The main representative of this branch is French, along with Franco-Provençal, Occitan, Provençal and Walloon.

The Most Significant Romance Languages and Interesting Facts about Them

Spanish is the second-most widely spoken language worldwide – used by over 500 million people. Not only is it spoken in Spain, but also on the American continent.

Do you know why Spanish uses the inverted question mark(¿)? It makes it easier to read the written text. Furthermore, it’s used to indicate whether the following sentence is interrogative or indicative. If the question forms part of a longer sentence, then the inverted question mark is placed before the first word of the clause asking the question (and not at the beginning of the sentence itself). For example: “José, ¿adónde vas?” (Where are you going, José?).

Portuguese is the first language for over 210 million people.

Interestingly enough, out of all Portuguese speakers, the smallest number live in Portugal. There are far more in Brazil and Mozambique.

Italian is different from most contemporary Romance languages because of its so-called double constants. It’s also the closest to its ancestral language – Latin. They share more grammatical similarities than any other Romance language, and Italian includes the most Latin words.

Many consider French the most romantic language in the world. But if you’re only just starting to learn French, and need to manage its complicated pronunciation, countless exceptions and both the decimal and vigesimal (number 20-based) systems in counting, a few not-so-romantic words might pop into your head.

Do you speak any Romance languages? Which one do you like the most?

« What Does It Take to Become a Good Translator?
Baltic Languages: Categorisation and Characteristics »
We've made some important changes to our Privacy and Cookies Policy and we want you to know what this means for you and your data.I acceptMore information