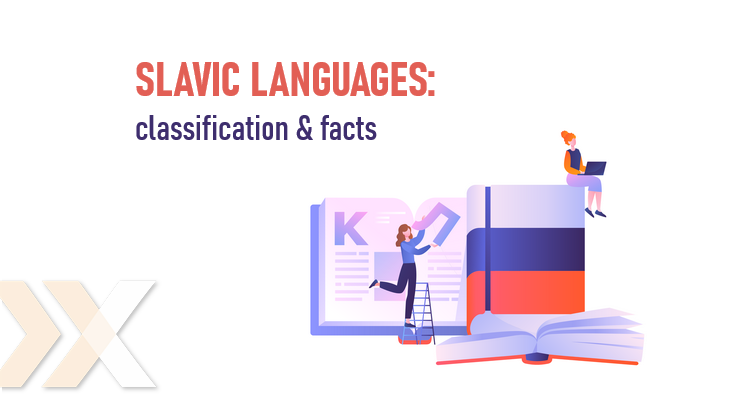 Slavic languages belong to the Indo-European language family and are primarily used in Central, Southern and Eastern Europe. They are spoken by quite a large portion of the world, and so they truly deserve our attention. This article discusses their evolution and current classification.

The History of Slavic Languages

Slavic languages evolved from Proto-Slavic, which developed from the Proto-Indo-European language around the first millennium BCE. This ancestral language was spoken in territories between the Dnieper and Vistula rivers.

Fun Fact: No written records exist of Proto-Slavic. Ethnologists use the comparative method to reconstruct it by analysing the relationships between individual Slavic languages.

Proto-Slavic remained a unified language at first. However, over time individual dialects – Slavic languages – began splitting off. This differentiation was primarily caused by the spread of Slavs to various areas of Europe and western Asia.

Proto-Slavic began splitting into particular languages around the first millennium CE. In turn, many changes occurred in the language, such as the elimination of closed consonants (ending words with a consonant). This led to the gradual emergence of individual Slavic languages. In 862, Cyril of Thessalonica produced the Glagolitic script, the oldest known Slavic alphabet. At first, Proto-Slavic separated into East Slavic and West Slavic, caused mainly by Germanic tribes migrating from the north to the south.

By the end of the 5th century, a third large group of Slavic languages split off in Southern Europe. Afte the fall of the Hunnic Empire, a significant number of Slavs arrived in the Balkan provinces.

West Slavic Languages include Polish, Czech and Slovak, together with Lower Sorbian and Upper Sorbian. They’re all quite similar and use the Latin (Roman) alphabet. One distinctive feature shared among all West Slavic languages is fixed stress on one particular syllable. In Slovak, Czech and Sorbian, the stress is on the first syllable, whereas in Polish it falls on the penultimate.

As the name suggests, these languages are used in Eastern Europe and parts of Asia. This language group comprises Russian, Belarusian, Ukrainian and Rusyn. Moreover, these languages use the Cyrillic script.

Did you know that Russian is the first language that was spoken in outer space? Today, it’s one of the two official languages used on the International Space Station.

East Slavic Languages all share their lexical stress. Consonant clusters /dl/, /tl/ or /dn/ are shortened in speech to /l/ and /n/.

This language group is found in Eastern Europe, mainly in the Balkans. It includes Bulgarian, Macedonian, Slovenian, Croatian, Serbian, Bosnian and Montenegrin. All of these languages share long- and short- form adjectives, as well as the suffix -ov- when creating plural forms.

Slavic languages have borrowed many words from other language families. However, this also often happens the other way around. For example, the word robot, used worldwide today, comes from Czech. Karel Čapek, a Czech writer, first used it in his novel R.U.R. He derived the word from the Czech noun “robota” – meaning work.

A fun fact about Bosnian is that it once briefly used the Arebica script, a special Bosnian variant of the Arabic script. However, it didn’t last long, and they ultimately switched to the Latin script used to this day.

Since Slavic languages are so similar to each other, linguists have tried to combine them into one universal language again. One of the first efforts to create an artificial Pan-Slavic language was that of Slovak amateur linguist Mark Hučko – named Slovio. So far, these efforts have been in vain, but we’ll see what the future holds.

« Language Skills and How to Write Them in Your Resumé
Meet Central Europe Conference 2022 »
We've made some important changes to our Privacy and Cookies Policy and we want you to know what this means for you and your data.I acceptMore information