10 Strangest Languages in the World | Lexika

10 Strangest Languages in the World 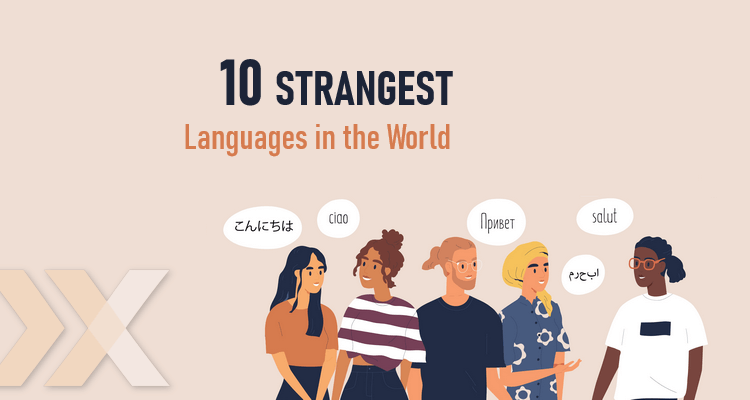 Reading time 4 minutes
Did you know that linguists currently register over 7,100 languages spoken worldwide? Some are spread around the globe, and some are only used by small pockets of people.

The latter category is what we’ll discuss in this article. Here are the world’s ten strangest languages that you might not have heard of yet!

Let’s start with something simple—Basque. It’s an isolated official language used in the Basque Country (part of Spain and France, located on the coast of the Bay of Biscay). In this sense, “isolated” means that the language doesn’t belong to any language family. It has many peculiarities, one of the most prominent being counting. The Basque numeral system, much like in French or the ancient Mayan languages, is based on the number twenty. Take the number 50 for example – in Basque, you would express it as 2 × 20 + 10.

Even though this language is extinct, it would be wrong not to put it on the list. Why? Because those who speak it have to whistle. That’s right – whistle. Silbo Gomero was used in the Canary Islands, or more precisely, on the La Gomera island. Its inhabitants exchanged information by whistling across valleys up to a distance of five kilometres. However, the advent of telephones gradually made its usefulness obsolete. That’s why in the 1990s the islanders launched an initiative to revive the language, and succeeded in declaring it a historical ethnographic heritage.

What might first strike you as just a bunch of letters mashed together is, in reality, the name of an official dialect spoken in Australia. It’s even taught at schools, so for now there’s no danger of it becoming extinct. And what is so special about Pitjantjatjara? There is no number greater than five. When counting, you go like this: 1, 2, 3, and then any bigger number is simply referred to as “many”.

This interesting language is spoken by many Amazon tribes. Its speciality lies in that it does not contain any words describing numbers or colours. Instead, the indigenous tribes use non-specific terms, such as “bright”, “dark”, “few” or “many”. According to MIT research, Pirahã appears to be the only language that does not have any words for numbers.

This language is unique for its multitude of its varieties. Statistics show that approximately 15,000 Eskimos living in Siberia and Alaska speak Yupik. However, a situation might arise where two people speaking the same language might not understand many of the words that the other person is using. This is partly because the Yupik language contains numerous morphemes, and one word can stand for an entire sentence.

For example: The word Sikursuarsiurpugu can be translated as “we will sail through thick ice”.

Have you ever thought about which language in the world has the shortest alphabet? The answer appears to be Rotokas, a language spoken in Papua New Guinea. Its alphabet only contains 12 letters: A, E, G, I, K, O, P, R, S, T, U, and V. There’s nothing like keeping it simple.

Guugu Yimithirr is considered to be the first indigenous language in Australia that was written down. It also provided the word gangurru, which means kangaroo. But it’s primary peculiarity is its descriptions of directions. Instead of the usual right, left, forward and backward that reflect the physical position of the speaker (or the person being spoken to), it uses cardinal directions: east, west, north, and south, based on which direction you’re facing. Therefore, it’s no surprise that Guugu Yimithirr speakers have a remarkable sense of direction. But before we move on to the next language, allow us a small question: Which hand do you write with, eastern or western?

If you’re fed up with studying grammatical categories, syntax, the passive voice, and similar head-scratchers, the Indonesian dialect Riau might be the language for you. Many consider it the most economical language in the world. This is because one sentence can take on multiple meanings.

Just the name of this language suggests its peculiarity. It’s spoken in Botswana, and besides the usual phones, which we use in English, it also utilizes the so-called clicking. Imagine if somebody tried to imitate a trotting horse. Researchers even suggest that more than 80% of the words in ǃXóõ begin with the clicking sound.

It’s hard to put in words exactly how this sounds. Your best chance to better understand this language is to find somebody who speaks it and witness it yourself.

This language will likely never be on the verge of extinction. In fact, it’s spoken by 3,5 million people worldwide. It’s one of the many official languages of Bolivia and is also used in other parts of South America. The reason why it’s on this list is its unique logic. The future is perceived as something that lies behind a person – not in front of them. The locals believe that we face our past, as we have already lived it. On the other hand, the future is something we know nothing about and cannot see, therefore it’s behind us.

If you liked this article, rest assured that many more exciting ideas are coming your way. ? Don’t miss a thing by following us on Facebook.

« Language Families: Definition and Structure
Who Is a Vendor Manager, and How Do They Help Translators? »
We've made some important changes to our Privacy and Cookies Policy and we want you to know what this means for you and your data.I acceptMore information