Differences between British and American English 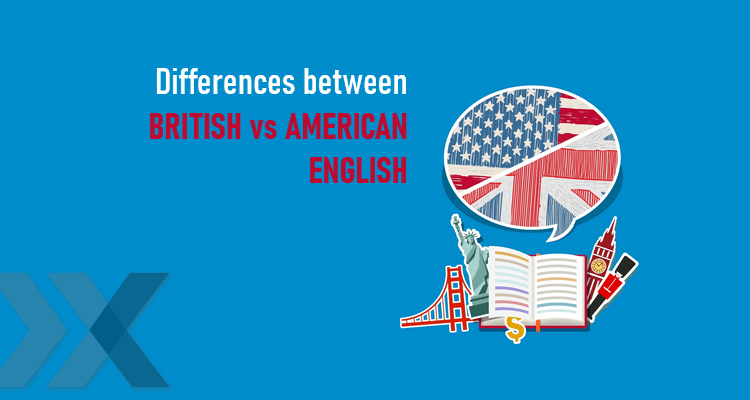 English is the second-most widely spoken native tongue globally and an official language in 53 countries. It first developed in Britain—or, more precisely, in the British Isles—but the majority of its speakers live in the United States. English is the main language for global communication and the most popular language among foreign-language learners.

Like any language, English has many varieties. The best-known varieties are British and American English. Can you tell them apart? Consider our comparison.

Are British and American English the same?

These two English varieties are definitely not the same, but they aren’t too different either. This is important to know if you’re a foreign English speaker and find yourself afraid that swapping a few words would render you incomprehensible. While this almost never happens, these two varieties do sometimes differ in spelling, pronunciation, vocabulary or even grammatical structures (as you will see below). However, globalization and the Internet have caused these differences to shrink. You may raise some eyebrows in London when asking whether the pants you want to buy have pockets, but we guarantee that you’ll eventually walk away with a nice pair of trousers.

We do advise that you stick to one variety when writing an official document or email, or when speaking to anyone in an official context. When writing, always make sure to switch your spell-checker to the desired variety. That way you will seldom make spelling mistakes. For vocabulary differences, check the Oxford Learner’s Dictionaries to see which words are typical to each variety.

But why are there differences in the first place? The answer isn’t simple, as many factors are involved. American English, which is older than British English, came to the American continent with the English settlers, whose pronunciation was based on rhotic speech. This means that the letter r was clearly pronounced, much like today. In Britain, the higher social classes softened the r sound which remained to this day. Different spellings were caused by Americans attempting to differentiate themselves from the British, which is mainly thanks to Mr. Noah Webster whom I advise you to Google. Having different words for the same thing resulted from both countries borrowing from neighboring countries. While Americans took many Spanish words, the British borrowed many from French. This is why the former uses cilantro and the latter uses coriander.

Sometimes, the differences are rather laughable, and you can watch plenty of hilarious YouTube videos where native speakers compare their vocabulary. To take a break from all this information, check out this British-American couple struggling to communicate while raising their child. But be sure to come back, as we’re about to dive into some major differences between British and American English.

While writing a text, you may have found your text editor marked a spelling as incorrect. Yet, when you checked it in a dictionary, the spelling was in fact correct. This can often be accounted for by the differences between British and American English. 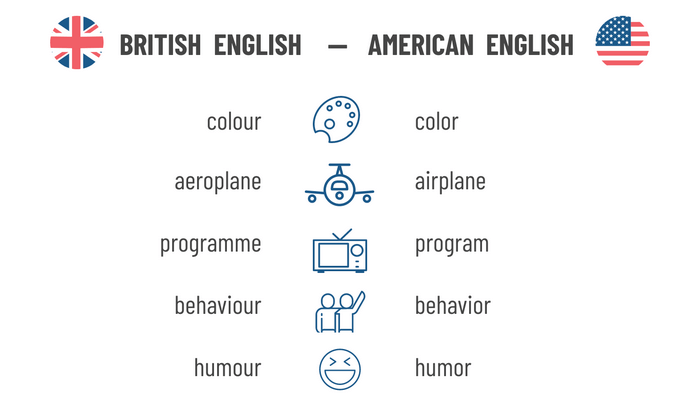 The spelling differences between British and American English also include letter changes and letter reversals: 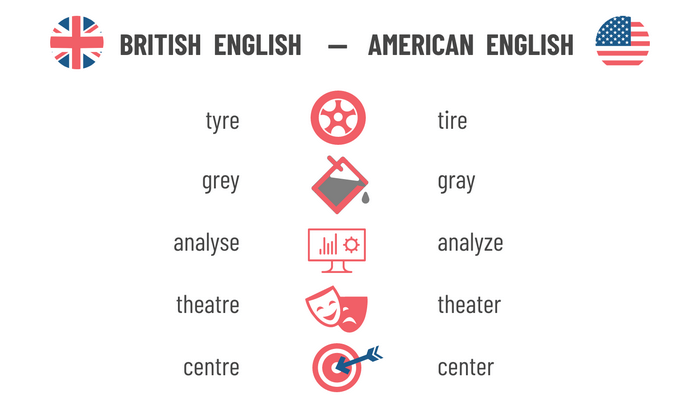 British English and American English differ even more regarding their pronunciation. You immediately know the difference between British and American accents when heard.

While the r sound is pronounced in American English, it remains silent in British English unless it occupies an initial syllable position. For example:

The stress can fall on different syllables as well:

American English sometimes simplifies the pronunciation by altering or omitting some vowel sounds:

The present perfect tense usage differs as well. The British normally use the verb to have (I have just arrived.) in this tense, whereas the Americans usually omit this verb. As a result, the sentences sound simpler: I just arrived. 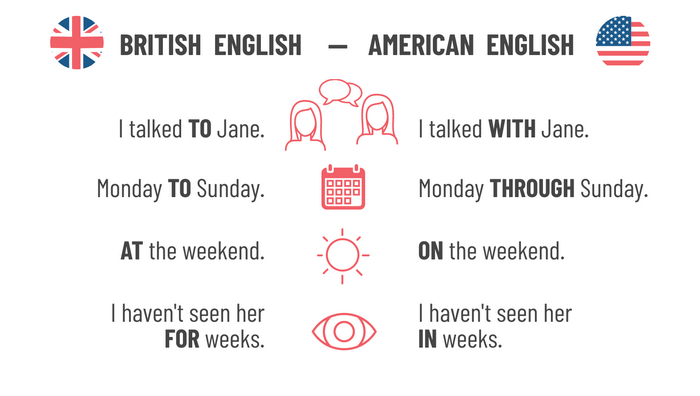 The grammatical differences also include irregular verbs, for example:

Collective nouns are also used differently. The words team and committee can be either singular or plural in British English, with the plural being more frequent, pointing to the fact that the group consists of multiple individuals. In the United States, the group is considered as a single entity; consequently, these words are always considered as singular.

Finally, for true English language connoisseurs, there is the present subjunctive. Before the 20th century, this structure had been used in both American and British English, but it remained only in the former. Americans use it regularly in mandative clauses, such as “I demand you be here.” or “She suggested he arrive early.” In Britain, this form is only used in formal writing. Also, in day-to-day life, should is usually inserted in the sentence, such as “She suggested he should arrive early.” 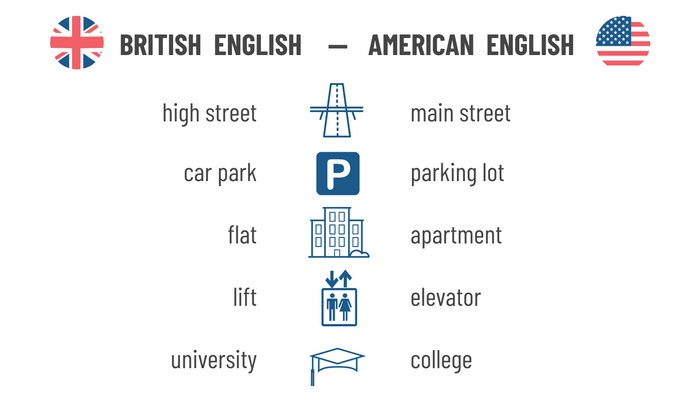 Sometimes these words can be used in just one variety. But a problem arises when a word is used in both varieties but with completely different meanings, for example: 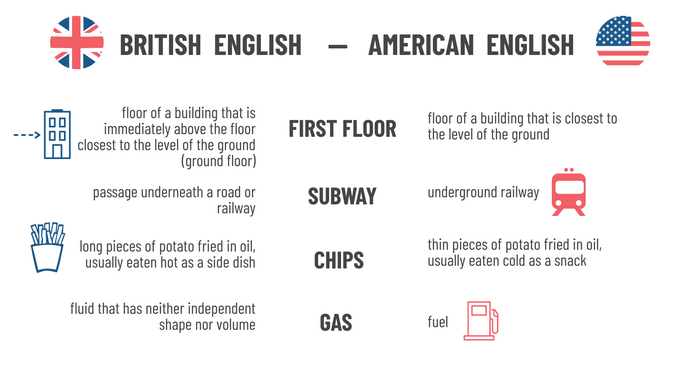 These differences mean that you should always specify which variety should be used by the translator in your English translations.

British and American slang and colloquialisms

“Taking a vacation” (American English) / “Going on a holiday” (British English) in either the US or Britain probably won’t get you invited to a formal conference. Yet they will work well among regular people. Unsurprisingly, the slang is different in both countries. Whether you wind up in a bar or a pub, you might hear some of the words in the following table.

Naturally, you won’t hear all of these words in every part of the US or Britain. Slang is, by definition, used only by a particular social group, which there are many of in both countries. If you are a translator, these words can often prove useful when translating modern literary texts, such as contemporary novels or television and movie scripts. In fact, many mistakes are made in these translations due to the lack of knowledge of slang terms and colloquialisms.

When traveling between Britain and the US, money can get a bit complicated, especially when trying to use proper English in these countries or translating economic texts or subtitles for movies. The colloquial term for the British pounds (£) is quid. While in the US, dollars ($) are sometimes referred to as bucks. And they don’t stop there. Unlike the British, who call coins smaller than £1 pences, Americans often use the word nickel for 5 cents, dime for 10 cents and quarter for 25 cents.

Things become even more complicated when discussing larger amounts of money but we’ll try to clarify it for you.

Regarding amounts under one dollar or pound, in American English the indefinite article is preferred, while in British English the numeral one is used. However, when discussing amounts higher than one dollar or pound, in America you either drop the words dollars and cents completely or mention them both, connecting the two parts of the phrase with the conjunction and. While in Britain you can use the denomination-less option, which is similar to the American method, or you can say both the amount and the denominations without a conjunction. Moreover, in the United States, the indefinite article is used together with the conjunction and and the use of numerals while omitting the conjunction after the thousands. And in Britain, the conjunction is omitted. This is why you would sooner hear this amount, $1.500, pronounced as “a thousand and five hundred dollars” and this one, £1.500, pronounced as “one thousand five hundred pounds.”

Confused? Try wrapping your head around this custom of American English: pronouncing larger amounts of money as multiples of hundreds. For example:

If you still haven’t had enough money talk, take a look at actual American and British bills (American English) / notes (British English) and coins. Many English speakers go about their lives without ever seeing them. Check out this excellent comparison video. You can also notice the differences in the monetary amounts we described in this section.

American vs British differences in dates

Now we arrive at one of the most confusing things: date formats. This confusion is largely thanks to the United States because they use the MM/DD/YY format, meaning that we celebrate Halloween on October 31, 2020 (10/31/2020). For non-Americans, this is spooky enough on its own. Whereas in Britain the format is more similar to most of the world, where they would write this date as 31 October 2020 (31/10/2020 or 31.10.2020). Moreover, in British English you are free to use dots instead of slashes (American and British English) / obliques (British English).

British vs American differences in time

Have you ever heard the expression military time? If yes, then chances are you heard it in an American film, not a British one. Military time is what many Americans call the “24-hour clock,” as this system of telling time is uncommon there and is predominantly used by the military, police, or in aviation. And, while it is used in Britain and the rest of Europe, Americans mostly use the 12-hour clock. Additionally, they use colons when telling time, whereas the British often use the full stop. This means that in Britain people may wake up at 8.00 and go to bed at 20.00, whereas in the US they may get up at 8:00 AM and go to sleep at 8:00 PM. AM comes from the Latin phrase ante meridiem (before noon) and PM from the phrase post meridiem (after noon).

Let’s end this article on a lighter note after accidentally setting your head spinning with all these different date and time formats. Let’s talk about Christmas or Winter holidays. This will also help us understand the nature of all these differences, because language always reflects the state of our world and particularly our social and cultural environments. For example, in the United States, you might be waiting for Santa Claus to bring your gifts, while the British wait for Father Christmas. The former lives in the North Pole, and the latter has his workshop in Lapland. At that time of the year, when you take a walk through, let’s say, Birmingham, you’ll be greeted with “Happy Christmas”. But that won’t happen in Austin, where you’ll only hear “Merry Christmas” or “Happy Holidays”.

Distinguishing between what is common in the United States and what is preferred in Britain can be incredibly useful. It shows that you have done your research and become more knowledgeable. When translating into English, it helps you sound natural when presenting to a native speaker from any English-speaking country. But, above all, once you’ve chosen the variety, the golden rule is to stay consistent. A purely British word or phrase in an otherwise American text can stick out like a sore thumb and disrupt the integrity of the text.

Yet when you’re outside of professional usage, enjoy both varieties in the same way native speakers often do. And don’t let yourself get flustered by the differences, as they hardly matter very much at all. In Britain, they do understand the concept of AM and PM, and in America, they don’t have any problem understanding that 16.07.2020 is the sixteenth day in July.

Which variety of English do you normally use? Do you prefer the sound of British or American English? Let us know in the comments.

I began working at LEXIKA in 2020 while studying translation and interpreting, with the catalyst for all these decisions being my love for the English language. Looking to translators one, my goal in LEXIKA is to get hands-on experience and further develop my skills. I am particularly passionate about American English and American literature and culture, which might be reflected in my blog posts.

« PDF or Microsoft Word? For translation, the choice matters
The importance of translation »
We've made some important changes to our Privacy and Cookies Policy and we want you to know what this means for you and your data.I acceptMore information