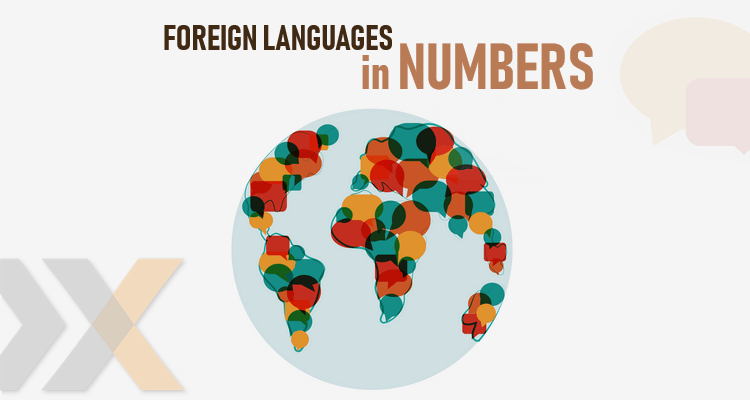 Do you know which language is the most widespread in the world? Is it Chinese, English, Arabic or some other language? The answer is not a simple one. For one thing, it depends on whether we only want to include the total number of native speakers of a particular language, or everybody speaking that language. In this article, we’ll take a look at 5 interesting statistics about languages.

The numbers are interesting and some might surprise you, so let’s take a look at them.

The most widespread language in the world...

To get a better picture of the numbers, we’ll begin with the total number of people in the world. Currently, the world population has reached about 7.7 billion people.

(You can switch between the tabs by clicking the left/right arrow or selecting from the drop-down window.)

...based on the number of native speakers of the language

...based on the total number of speakers

The British Council went one step further in its survey. Its aim was to estimate the number of people having a level of English enabling basic communication. It arrived at the number of 1.75 billion people, which is nearly a quarter of the world’s population.

...based on the number of countries where the language is an official language

How many languages are there in the world?

It is interesting to look at how these languages are distributed throughout the world. Just for comparison: there are 288 languages in Europe, whereas in Papua New Guinea (with a population similar to Austria’s) people speak up to 840 languages. In practice, this means that when you meet two people in Papua New Guinea, they are very likely to speak different mother tongues. For those who like numbers: according to Greenberg’s Diversity Index, this probability is 98.8 % (in the UK, for example, it is 15.4 %).

If you want to see for yourself, or to count the languages, we’re including a detailed map of the world with the following distribution of languages:

Around the third of all languages are so-called endangered languages, with most of them having fewer than 1,000 speakers. A few years ago, there was a rumour that there was a language in Mexico – Ayapaneco – which was on the verge of extinction because the only two people speaking it were refusing to talk to each other. Luckily, it turned out that this was just a myth.

It comes as no great surprise that the prize for ‘the most-studied language’ goes to English, followed closely behind by languages closer to us – at least geographically.

Asian languages are on the rise, though, so the order might change in the near future.

Did any of these statistics surprise you? Are you interested in further information on languages? Let us know in the comments!

I began my journey at LEXIKA during my university days in 2017. LEXIKA, the people that form part of it, and the translation industry have grown on me since then. One of the day-to-day challenges I have to face is finding new talented translators. Furthermore, I take care of developing good and open relationships with our long-standing translators who make it possible for us to do what we love. Over time, I was put in charge of marketing activities and internal HR. I don’t have to worry about my job turning into a daily grind and I learn something new every day. ?

« 5 tips for preparing your text for translation (and for other purposes)
LEXIKA at memoQfest 2019 »
We've made some important changes to our Privacy and Cookies Policy and we want you to know what this means for you and your data.I acceptMore information