What is Translation (Definition & Meaning) | Lexika 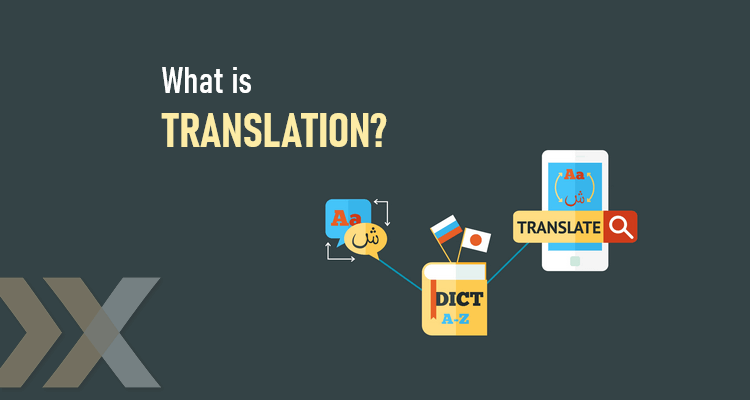 Each day brims with countless interactions across various languages. Translation bridges us all together – languages, cultures, and people – yet few understand what it means.

There is no “best” description, as everyone utilizes different lenses. Still, nearly every translation definition within the field includes three crucial parts: source language, target language, and transfer of meaning. Simply put, translators transfer the meaning from the text written in the source language to the target language. Let’s unpack this step by step:

Translation theory in academia started with these essential building blocks several decades ago. It has since expanded further through the inclusion of new concepts, mostly from adjacent fields, such as linguistics. Therefore, along with the birth of translation studies, the concept of translation was born.

The concept of translation

The concept of translation has evolved so much that some say translation encompasses nearly everything – a building is a ‘translation’ of an architect’s ideas into the physical world. But the groundwork had to be built first. This happened hundreds of years ago, well before translation studies were established as an academic discipline.

In the beginning, fundamental distinctions appeared in Western and Eastern ancient texts, like the difference between literal translation (metaphrase) and sense-for-sense translation (paraphrase). For example, have you ever noticed how films or books in different countries occasionally have a title that is seemingly unrelated to the original? In these cases, translators (and marketers) often create their own text and choose completely different titles for various reasons: length, catchiness, appropriateness, and so on. This process is also known as transcreation. Furthermore, it’s normal to discover that such texts have little in common with the source text at the textual level.

Does something make translations unique? Many think translations should be indistinguishable from authentic texts. This would mean that good translators, just like good interpreters, should be invisible. On the other hand, many others feel that translators’ invisibility hurts the profession and even takes something unique away from the reader. Welcome to the age-old translation debate over fidelity and transparency! In one sense, much of translation can be explained as the interplay of these two ideas. Some translators want their texts as natural as possible, sometimes at the expense of faithfulness. In contrast, others prefer to follow the source text religiously, and a third camp prizes the middle ground.

Many other conceptual tools and models have been conceived to define and practice translation. Searching for ‘the right way’ created several paradigms – the descriptive or prescriptive approaches to studying and defining translation. No unified translation theory exists, nor a single, comprehensive definition. This becomes even more apparent when viewing translation practice history – there’s hardly any common thread binding all translations together.

The history of translation

One thing that remains constant is that translations serve to propagate ideas. Recognising little parts of the history of translation helps us grasp the bigger picture. For example, understanding the etymology of the word ‘translation’, which originates from the Latin trānslātiō (to carry over, to bring across), sheds light on today’s ‘transfer of meaning’.

Translations have facilitated communication throughout the centuries on a massive scale. While translation scholars dispute the first documented translation, many claim it was the monumental Epic of Gilgamesh. Since then, innumerable literary translations have been produced.

In the Western world, translation also fuelled Christianity’s spread. From St. Jerome’s Vulgate to the King James Bible, the biblical word permeated the world thanks to millions of translations in dozens of languages. This desire to spread ideas – whether from politics, religion, philosophy, or science – led to the democratisation of translation through technology. Nowadays, machine translation connects cultures worldwide in real-time, and translations are more abundant than ever before. If this has piqued your interest in the rich history of translation, read more here.

Here we have it all – literature, religion, culture, etc. But how to make sense of something that is evidently everywhere, and then condense it into digestible chunks? Simplification and categorisation are required for such a diverse topic.

There are many different classifications of translations based on numerous factors. Some are familiar to translation scholars, while others better aid those looking for a particular translation service. The latter will most likely come across a text type division, which usually includes the following eight types of translation:

Each category is intricate, requiring a different approach and translation technique – translating bank statements differs vastly from untangling Dostoevsky. Moreover, each category contains subcategories that depend on the scholar and their particular paradigm. For example, technical translations can be further divided according to the area of expertise (IT, automobile industry, etc.) or text type (user guides, manuals, patents, etc.). Translation services are quite varied, so if you need any extra information in order to understand them better, read more here.

To contrast the pragmatic division above with a more theoretical, linguistic one, three new terms must be introduced: intralingual, interlingual, and intersemiotic. These are the brainchildren of Roman Jakobson, a famous linguist whose concepts also impacted translation studies. Here is a short explanation:

The classification you choose also transforms the concept of translation and its importance. To paraphrase an influential translation scholar, Gideon Toury, translation is whatever the target culture (readers) accepts and regards as a translation.

Do you agree with him? If this article changed your perception of what translation is, or if you want to share what it means to you, leave a comment below!

I’ve been working in the language industry since 2016, primarily teaching Slovak and English while working on my Translation/Interpreting and Philosophy degree at MBU in Banská Bystrica. I’ve started as a freelance translator in early 2021. After gaining some experience in the field, I started working with LEXIKA as a part of the Mentoring Programme. Taking my first steps as a translator with LEXIKA reinforced my decision to fully dedicate myself to languages. I’m currently working on adding Spanish to my repertoire. My next steps are focused on improving my knowledge of markup and programming languages since technical competence is always desperately needed in the translation industry.

« Online Security: Data Encryption
Online Security: Which translator should I use? »
We've made some important changes to our Privacy and Cookies Policy and we want you to know what this means for you and your data.I acceptMore information