What’s the difference between translation and interpretation? 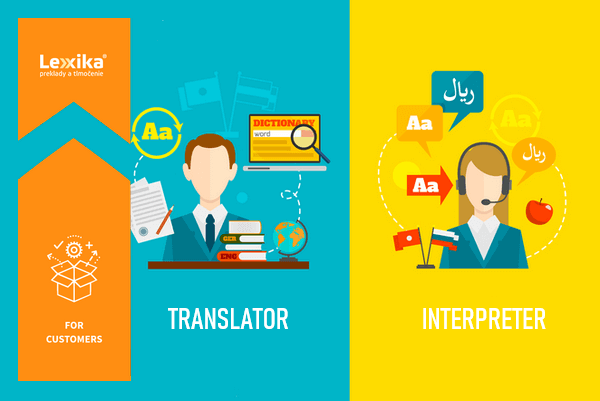 Very often translation and interpretation get mistaken for each another. These professions might seem very similar, or even the same at first, but actually that is not true.

The main difference between them is that translation is transferring written text and interpreting is oral reproduction of spoken language.

However there are many more differences between translation and interpretation, or between a translator and an interpreter.

It is certainly true that both translators and interpreters must have an excellent command of both their mother tongue and a foreign language. But each of them need this in a different way.

A translator’s main task is to translate texts from the source language to the target language, which means they have to have deep knowledge of grammar and stylistics. They should also be able to play with words, such that the text has a perfectly natural effect on the reader.

The majority of professional translators translate exclusively into their mother tongue. Only in rare cases will a translator know a second (foreign) language at the same level as their own. Of course there are exceptions.

On the other hand, an interpreter has to be able to communicate in both languages without hesitation. Their command of spoken language must be flawless, and they have to speak clearly and articulate properly.

A translator should, above all, be detail-oriented and perfectionist, and unsatisfied with the first possible solution. An analytical and patient character is quite important, because researching and finding a specific term can take many long minutes.

Besides excellent communication skills, the ability to work under pressure is a basic requirement for an interpreter. When interpreting, their brains must constantly concentrate and work in top gear. This is because they have to listen to what the speaker says, understand the information, process it, remember it, and then reproduce the same meaning in a different language. It’s even more difficult in simultaneous interpreting, where the interpreter is listening and speaking at the same time.

Do you still think that interpreting is not so difficult? Try to watch your favourite film or series and repeat the actors’ lines. You can repeat them in the same language to make it easier. You’ll see: if you stumble over one sentence, you won’t be able to catch up, and you’ll have to leave something out. If you want to try something more advanced, interpret the actors into a foreign language. If you participated in this little experiment, share your experience with us in the comments. How long did you last “interpreting”? 🙂

Translators have various work tools at their disposal that help, and somewhat simplify, their work. These include translation support tools (CAT tools) as well as MS Word. While working, they can (and must) make use of available reference materials, translation memories, and dictionaries, for the final translation to achieve the required quality.

Interpreters don’t have such “conveniences”. They can study materials beforehand – if there are any – but there rarely are. However, even with thorough preparation they have to stay highly alert and be ready to react promptly, since the situation can go in any direction at any point.

What do they have in common?

It’s definitely a love for languages. Whether they work with written or spoken language, translators and interpreters have to reproduce the information appropriately, so that it’s understandable for the target audience. They should be aware of cultural specificities as well. If they’re not, certain unfortunate situations might take place.

Another key requirement for both professions is specialisation in one or more fields. Translators and interpreters have to understand the topic thoroughly, so there won’t be any inaccuracy in conveying the information.

Both professions are unquestionably appealing, and becoming a professional translator or interpreter requires years of hard work. Which of the two do you find more attractive?

I began my journey at LEXIKA during my university days in 2017. LEXIKA, the people that form part of it, and the translation industry have grown on me since then. One of the day-to-day challenges I have to face is finding new talented translators. Furthermore, I take care of developing good and open relationships with our long-standing translators who make it possible for us to do what we love. Over time, I was put in charge of marketing activities and internal HR. I don’t have to worry about my job turning into a daily grind and I learn something new every day. 🙃

« 4-eyes principle in translation: adding value or waste of money?
Simultaneous or Consecutive Interpreting? »
We've made some important changes to our Privacy and Cookies Policy and we want you to know what this means for you and your data.I acceptMore information