The History of Translation | Lexika

The history of translation through the ages 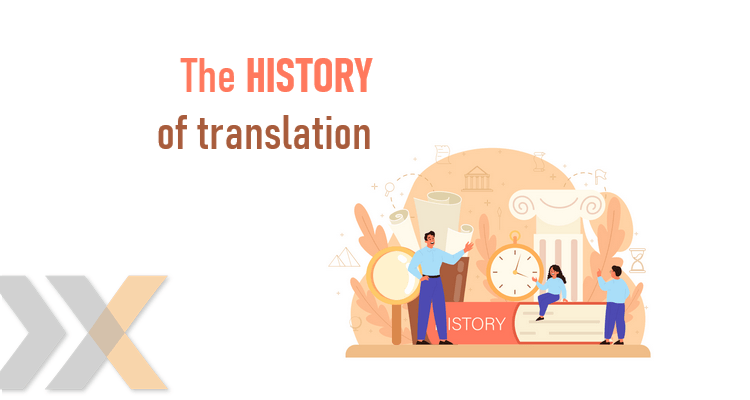 Much like many other massive worldwide phenomena, translation is inextricably linked to its history. It stands for us to marvel at, but also to learn from its mistakes. And mistakes did happen. Believe it or not, the explanation for countless pieces of art depicting Moses with horns might just be something small lost in translation.

One of the first known translated texts is, unsurprisingly to any literature scholars, the Epic of Gilgamesh. It is one of the oldest texts known, dating back to 2,000 BC. The ancient world is also known for the translation of Indian sutras into Chinese by Buddhist monks.

On the other hand, an interesting artifact relating to translation is the Rosetta Stone. This stele contains the same text written in three different scripts: Egyptian Hieroglyphic, Egyptian Demotic and Ancient Greek. At the time of its discovery, Egyptian Hieroglyphs remained a mystery. But finding this stone meant that scholars could decipher these texts using Ancient Greek. It was found in 1799 by the French during Napoleon’s campaign in Egypt. However, when the British defeated the French in 1801, they took the stone. Today, it stands on display in the British Museum in London.

History of translation of Bible

The Bible remains one of the most important documents in the western world. Uncoincidentally, some of the oldest and most important events in translation history also relate to it. In the 3rd century BC, the Old Testament was translated from Hebrew into Greek by 70 scholars. This translation is called the Septuagint, since septuaginta means seventy.

Did you know that translators have their own catholic patron saint? It is Saint Jerome, a scholar in a time when the world had enough of antiquity but wasn’t quite ready to enter into the Middle Ages. Saint Jerome translated the whole Bible into Latin, which was quite the feat. This version is known as the Vulgate and is sometimes still used in the Catholic Church.

Of course, lacking modern dictionaries and translation tools, Jerome inevitably made a few mistakes. Most famous is the description of Moses having horns. Jerome likely misinterpreted the Hebrew word “keren”, which has several meanings, including “horn”, but also a “beam of light”. As a result, for centuries afterward artists depicted Moses with horns growing out of his head. Even Michelangelo’s famous statue of Moses the Lawgiver has horns! Another example is the famous Apple of Eden. According to scholars, it could have been any other type of fruit, but Jerome simply liked the pun malus/malum (apple/evil).

As time went on, some scholars began to believe that the Bible should be translated into other languages than just Latin. Not everyone spoke Latin after all. However, this wasn’t met with much enthusiasm by the Catholic Church. One thing led to another, more issues piled up, and the Reformation and Protestantism were born. Translation helped spark a revolution in Christianity.

Afterward, many versions of the Bible in several European languages began popping up. Here are some of the more famous English translations:

History of translation of Quran

Since Arabic is a Semitic language, it typifies the issue of one word having several different meanings. Hebrew is also a Semitic language and presents similar issues, causing the already mentioned Moses with horns to exist. In Islamic theology, the Quran is a revelation given very specifically in Arabic, and thus they believe it should only be recited in Arabic. Furthermore, translating the book into modern languages has been a long-standing issue. These translations are called “interpretations”. Marmaduke Pickthall, for example, author of the first English interpretation of the Quran, named his work “The Meaning of the Glorious Quran”, rather than simply “The Quran”.

Technology has come a long way since Saint Jerome or even John Wycliffe. We now utilize machine translation daily. For most people, this means using Google Translate on products in stores when on holiday or translating the statuses of your foreign social media friends. It is never perfect, but it has come quite a ways from where it used to be and is only getting better.

The scientific field of machine translation first appeared in the US in 1949. The first researcher was Yehosha Bar-Hillel of MIT. Propelled by the Cold War, several other research teams also started up Russia and Japan. Eventually, at the turn of the millennium, machine translation reached the World Wide Web, becoming free and accessible for everyone.

In recent years, Neural Machine Translation has begun to appear. This type of translation learns from all previous inputs, human translations, etc. The more texts it receives, the smarter it becomes. It has become a viable alternative for low-visibility texts, where small mistakes usually don’t matter, as long as the text is roughly understandable.

Since the very first translators began their work, they also started discussing their translations. Usually, these talks were prescriptive—telling others how to translate. Translation theory can be traced back to Cicero. He made several remarks on how he used translations from Greek to Latin to improve his oratory skills.

As the need for translations grew larger, even more people started to think about the right way to translate. After all, you definitely want to learn from the past and avoid mistakes and misinterpretations. Sometime in the mid-20th century, Translation Studies as a separate academic discipline began emerging. Various schools of thought and fields of inquiry began establishing themselves. Translation studies thrived. Being a relatively young academic field, it strives to keep up with modern trends. New translation theories incorporate CAT tools, Neural Machine Translation, as well as subtitling or post-editing.

Translation has come a long way, but it still has a long way to go. With so many possibilities throughout today’s world, it has never been easier to find a quality translator with proper training, experience and the necessary tools to carry out any translation task you could think of. On the other hand, it is also all too easy to stumble upon an amateur who is oblivious of the many translation pitfalls revealed in history.

I began my internship at LEXIKA in 2020. As I am wrapping up my translation and interpreting degree, I am overjoyed to have the possibility to translate and work with professionals in the industry even before I finish my studies. My responsibilities here are fairly simple: translate, learn, and translate some more.

« Translating marketing texts
Online security: Creating and remembering a strong password »
We've made some important changes to our Privacy and Cookies Policy and we want you to know what this means for you and your data.I acceptMore information