How to build a company term glossary | Lexika

How to build a company term glossary 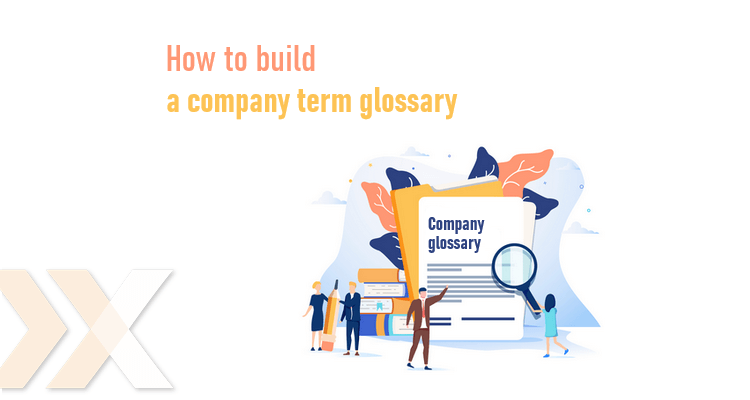 We discussed the benefits of a company glossary in our previous article, in which we briefly explained what such a glossary actually is. In this article, we would like to highlight the importance of a glossary of terms and call your attention to what it should contain as well as show you how easy it is to create yourselves.

Let’s start by reminding ourselves why a glossary of terms is useful. The main benefits include consistent translation, reduced translation time, and subsequent cost-cutting. Translations done without the help of termbase are estimated to raise the cost of additional editing by as much as 15%.

How does a term glossary work in practice?

Imagine that you work in the automotive industry and need to translate a manual of several pages from German to English. In this manual, the word “car” appears on almost every page. The noun car can be translated from German into English using several different expressions, such as motorcar, automobile, or vehicle. By specifying in the glossary that the word car should be translated into English solely as automobile, you will prevent the translator from using a different expression in their translation.

In addition, the majority of translators and translation agencies today work with computer-assisted translation (CAT) tools, into which term glossaries can be imported in advance. If a predefined term appears in the text, the software will alert the translator to use the required translation. This means that the translator does not need to spend time and effort looking for these expressions.

When should you create a term glossary?

The term glossary can also be created while the translation work is in progress. However, in this case you need to allow for the extra time (and possible financial costs) necessary to consolidate the terminology.

The term glossary is alive, which means that you can change it, add to it, or remove terms it currently contains. It should therefore be sufficient to create a term glossary with a small number of entries to start with. Additional entries can then be added one by one while additional texts are being translated. This means that, along with the finished translation, you can ask your translator or translation agency to send you a list of suggested additional terms to be added to your term glossary.

Put simply, we can say that a high-quality term glossary should first and foremost contain terms related to your company, the industry in which you work, and expressions/terms which define your company in some way. To break it down for you, these are:

In addition to terms and their equivalents in any given language, you can include term definitions as well as usage examples in your term glossary. By doing so, you will help your translator to familiarize themselves with the terminology.

Please note: Each term is always given in a certain context, and even if you provide your translator with a perfect glossary of terms, there will be times when the predefined term is not suitable for the context. The translator will then decide to choose a different, more fitting expression. In particular, such situations can arise when working with polysemous terms, i.e., words that have two or more distinct meanings. However, the translator should always draw your attention to any change in such cases.

It is important to note that the quality of the term glossary is not dependent on the quantity of terms it contains, i.e., the equation “more terms = better quality” does not apply. The number of terms in the term glossary depends on the size of the document, as well as the extent such key terms are used in the document. It is equally important to ensure that each term appears in your glossary only once, especially for collocations.

And now... let the creative juices flow! Or... maybe not?

By now you should know everything that should be in your term glossary. However, if you still do not feel up to the task of creating one, do not worry. You can leave the job to your translator or translation agency. This will ideally be a collaborative process between the two of you. A glossary can be developed in two ways:

2. Right before commissioning the translation and using either the source text or the reference materials, you will ask your translator or translation agency to draw up the term glossary for you and send it to you for final approval.

I started working at LEXIKA in 2017, shortly after getting a degree in translation and interpreting. I was overjoyed to be able to work in the field in which I majored. I work as a project manager and oversee the processing of projects, such as specialised (uncertified) translations, interpreting projects, and other related services. A pleasant and friendly atmosphere prevails in LEXIKA and while working, I learn a lot about the world of translation and interpreting, and it also helps me to grow as a person. (2020 Update: After more than two years, I decided to return to my home town, but I will always keep fond memories of LEXIKA and look forward to paying them a visit. I am happy and grateful that I could be part of the LEXIKA team.)

« This year, we underwent our usual audit in an unusual way
The handiest CAT tool features »
We've made some important changes to our Privacy and Cookies Policy and we want you to know what this means for you and your data.I acceptMore information