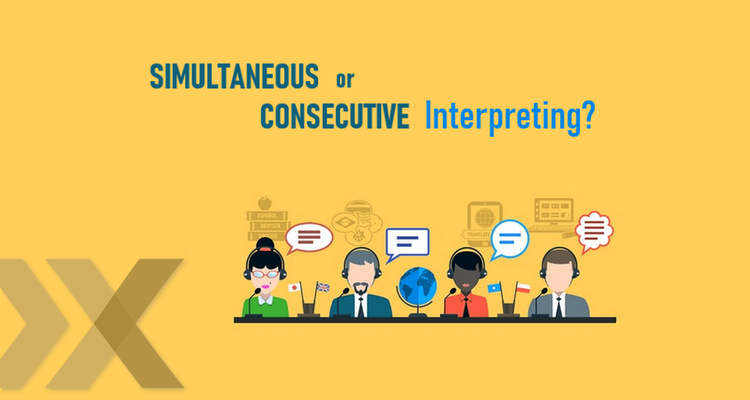 Interpreting is often confused with translation, but as we explained in the previous article, the difference is that interpreters work with the spoken word, while translators work with written text.

Like translation, interpreting has certain specifics too. Interpreting is primarily divided into simultaneous interpreting and consecutive interpreting. If you need to arrange interpreting for your company or business partners, or for a conference with dozens or hundreds of attendants, and don’t know how it all works and what type of interpreting you need, this article is for you.

Simultaneous interpreting is usually performed with interpretation equipment – if you have ever attended an international conference, you might have spotted glassed-in booths, inside which pairs of interpreters are seated, speaking intently and often gesturing as well. In these “interpretation booths”, interpreters have all necessary documentation, microphones, headphones, and other equipment. All interpreted text is transmitted into the headphones of the listeners

Simultaneous interpreting in booths is therefore suitable for conferences or large events, when interpreting to and from several languages, for official events or high-level negotiations. When considering simultaneous interpreting, there will be a need for more space and equipment cost (booths, installing the sound system, etc.) – but at Lexika, we are happy to provide the necessary equipment.

Let’s describe simultaneous interpreting in more depth, since it is connected with another quite frequently used type of interpreting. This is “chuchotage” (from the French word for whispering). In practice, chuchotage means the interpreter listens to a speaker while literally whispering to a listener in another language. Imagine for example a round-table business negotiation, with two English-speaking managers talking in English about merging their companies. Their business partner from Germany has an interpreter by his side, who listens to the conversation in English and whispers directly in German. This way, the German business party stays in the conversation and gets all the necessary information almost immediately. So compared to consecutive interpreting, the simultaneous interpreting provides faster information transfer, though it is not suitable for all conditions.

However, to avoid headaches when choosing the right type of interpreting, at Lexika we will gladly advise you and ensure tailor-made interpreting services.

I began my career at LEXIKA in 2016 as an assistant project manager and with some breaks in between, which I took to practice foreign languages and work in the U.S. and Italy, I finally got a translation and interpreting degree with a major in English and Italian. Later on, I moved to the position of a project manager. I had been translating more actively since 2014, but currently I have no time for it and I rather grab a well translated book (or the original version). My background allows me to process and oversee projects in detail and to respond to unusual requests coming from our clients. I enjoy speaking with translators about/on different “language” levels.

« 4-eyes principle in translation: adding value or waste of money?
What you should know before deciding on a CAT tool »
We've made some important changes to our Privacy and Cookies Policy and we want you to know what this means for you and your data.I acceptMore information