What Is Transcreation and When To Use It? | Lexika

What Is Transcreation and When To Use It? 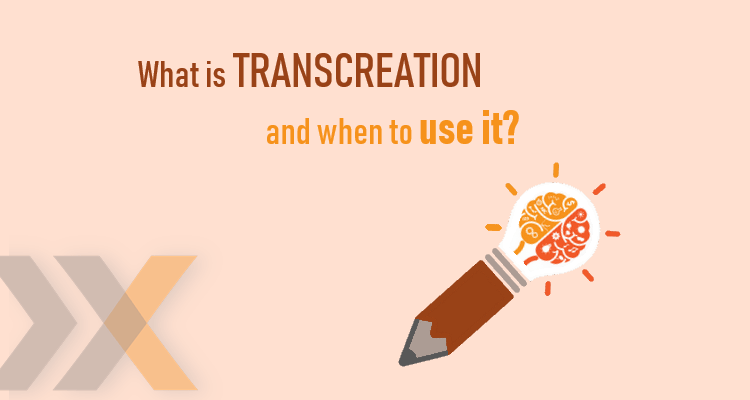 In this article, we’ll talk about the difference between an “ordinary” translation and transcreation and we’ll also look at how transcreation shouldn’t be done.

Since the word transcreation is not very common in English, we can use expressions like text recreation or creative translation. It is a process of creative “rewriting” of the source text or other materials in such a way as to maintain the original purpose of the text. The original purpose means mainly that the final text should convey the same message and stir up the same emotions in the reader as the original text.

The primary reason for using transcreation is that every target group or market has different customs, cultural norms and language. What is funny in English, might not make any sense in Italian for example. Faithful translation might not be effective.

But we don’t want to bother you with a lengthy lecture, let’s have a look at what this process comprises and how it differs from an ordinary translation.

Imagine you want to expand your business, operating on the national market, internationally. Marketing department and skilful copywriters created a professional publicity text that meets all the requirements. For domestic customers it’s catchy, it highlights your company’s goal and last but not least increases their interaction with the web content or posts on social media. Basically, it works flawlessly and especially it is efficient.

Imagine you want to achieve a similar success on a Spanish-speaking market, and so you decide to have the texts translated into Spanish. It would be a mistake to just take all the texts and have it translated standardly thinking: “when it’s in Spanish, the Spanish people will understand it without any problem”. Even though the result would be a professionally translated text, it might not be adapted for the target culture or market. When preparing text for local or foreign markets, it doesn’t pay to be thrifty. That would sabotage all the effort you have invested in the important preparation of the materials.

And here comes transcreation that is different from an “ordinary” translation. Recreation of the text often requires a more generous amount of creativity than a standard translation. It’s far from difficult to adapt a large number of puns, cultural references but also visuals and graphics for the target market. These materials are usually dealt with by experienced linguists who master not only source and target language but they are also familiar with the target culture, especially the very market the company is about to enter. They are also well-informed in the area of marketing and know what expressions will work on the target market. This will help your company catch the attention of more foreign clients. The aim of language transcreation is to create a text which seems to have been written in the target language (so if you are expanding to Spain, it should seem as if formulated and written directly in Spanish).

Now, you might ask why not hire a foreign marketing agency that will create the marketing campaign from scratch. Certainly, this would be a possibility. But if you want to maintain the spirit of the original text, you need someone who speaks both languages. Since you already have source materials, there’s no reason not to use them.

Transcreation doesn’t work just with text. Visual elements play a significant role in advertisement. An example of failed transcreation is a story that has resonated several times among translators. An English company producing infant formula decided to expand to the Arabian market. They invested quite a large sum of money into the campaign and ordered a professional text for an infant milk advertisement. Their billboards showed three consecutive fields with accompanying text – in the first field, there was a sad baby, in the second a baby that got a bottle with their milk and in the third field the baby was happy. The creators forgot that Arabic is read in the opposite direction to English. Thus, the whole text with the pictures suggested that if a baby drinks the promoted milk, he/she will not like it and will get sad.

However big you target market is, in Lexika, we will gladly offer you custom services and help you with transcreation so that you don’t end up similarly.

I began my career at LEXIKA in 2016 as an assistant project manager and with some breaks in between, which I took to practice foreign languages and work in the U.S. and Italy, I finally got a translation and interpreting degree with a major in English and Italian. Later on, I moved to the position of a project manager. I had been translating more actively since 2014, but currently I have no time for it and I rather grab a well translated book (or the original version). My background allows me to process and oversee projects in detail and to respond to unusual requests coming from our clients. I enjoy speaking with translators about/on different “language” levels.

« 25th Anniversary of a Translation Agency: How Did It All Start?
How to get an express translation done easily »
We've made some important changes to our Privacy and Cookies Policy and we want you to know what this means for you and your data.I acceptMore information