Understanding the Types of Interpreting | Lexika

Understanding the Types of Interpreting 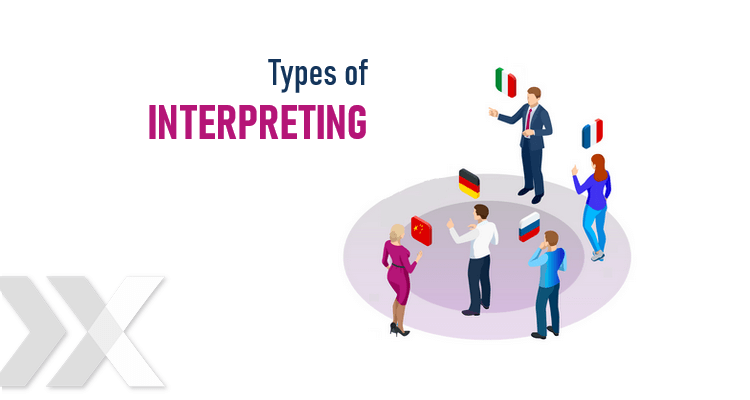 When trying to get your meaning across in a language other than your own, sometimes simply employing a translation service is enough. For instance, when all you need to worry about is the distant, looming threat of a deadline and finding someone knowledgeable with the subject matter and the target language.

However, at other times, this need may arise in real-time, with people speaking another language and attempting to communicate with you in person, during a meeting, at a conference or in the midst of an important business negotiation. The good news is that you have no reason to panic—all you need to do is employ the services of a skilled interpreter. In this article, we will explore what interpreters do and learn about the different interpreting services.

Simultaneous interpreting does this in a shorter span, sentence after sentence, with no added pauses or delays. They both require slightly different sets of professional skills and expertise, but if you suspect that one is more difficult than the other, you may be onto something. Let’s ease our way into understanding interpretation by looking at some of its easier forms.

Consecutive interpretation can be more taxing on the interpreter’s memory, but its looser nature isn’t due to the interpreter forgetting something and trying to make up for it. Quite the opposite, as consecutive translators are expert note-takers, which they then use to fully and accurately reconstruct and convey the original speech segment in the target language. Moreover, their note-taking must be efficient, focused and purposeful, as they’re far from sitting in a lecture theater hoping to get the general idea of a lecturer’s point. These interpreters need to get it right and reasonably quickly.

These masters are most often found in a dedicated sound booth, wearing headphones and speaking to a microphone, during a conference or a high-level negotiation. However, it is also possible to do simultaneous interpreting in person, with the interpreter sitting next to their client and talking directly to them, which is called whisper interpreting. On top of all the skills required of a simultaneous interpreter, whisper interpreting creates additional strain on their vocal control and listening skills, making the job potentially even more difficult. Kudos!

We frequently encounter certain types of community interpreting whenever there are many speakers with limited English proficiency (LEP). This can happen when working with immigrant services or refugee families in need of assistance, or simply when facilitating communication across language barriers. It also happens in vibrant multinational areas, where access to healthcare and other public and social services might be an issue, and community interpreters are a highly-valued asset.

Another case of managing an LEP situation might be escort, or travel interpreting, where the interpreter accompanies an individual, or a group, when traveling abroad. In this situation, their job isn’t limited to providing language services only, but also acting as a source of important cultural knowledge and awareness.

A similar situation wherein facilitating understanding that goes beyond language occurs with onsite interpreting and liaison interpreting, with the former having the interpreter act as a personal guide to a specific location (business, event, venue, etc.), and the latter having the interpreter acting as a host to a visiting group of people. In both situations, sensibilities and awareness beyond the knowledge of the language and interpretation skills are a must.

Interpreting, like so much else in the modern age, has been affected by technology and thus developed several adaptations to it. Interpreting technology mainly allows us to deal with increased distance between the speakers, for example by employing over-the-phone interpretation (OPI). Regarding techniques, both simultaneous and consecutive interpreting can be utilized in OPI. Depending on the purpose and the client's preference, one might be more suitable than the other. However, scheduled phone interpreting may be more permissive to consecutive interpreting, as the phone call’s length and the structure can be planned and anticipated.

Webcams and video conferencing tools have taken this technology even further, allowing interpreters and agencies to offer video remote interpreting (VRI). Depending on the context, VRI can provide a lot of added value, such as facilitating oral interpreting over distance for people with a hearing impairment, thereby giving them the ability to lip read. Other types of oral interpreting are utilized, especially in higher education, but modern technology applications toward greater accessibility are always an uplifting sight.

Interpreting is an incredibly useful and valuable art. It connects people and creates a bond beyond the words themselves. It facilitates understanding and progress in many different situations. Interpreters are among the most highly-trained language professionals, with skills that can’t be found elsewhere.

Perhaps you already have an experience with interpreting that you can share in the comments? If not, hopefully you have learned something new today, and the next time you’re in need of an interpreter, you will have a newfound appreciation for the seamless ease with which they do this truly difficult job.

As a bit of a restless expat, translation and writing haven’t initially counted among my passions. Having previously lived, worked and studied in eight countries on three continents, I have made my way through academic research and teaching English before serendipitously finding LEXIKA in 2020 and joining the team. Over the last couple of years, I have gotten a few original publications and a range of translation projects under my belt, constantly striving to learn something new and improve. Currently split between writing, translating and a product research gig for a US tech startup, I am a true jack of all trades, master of none.

« How long does it take to translate a 16-page contract?
Online security: Antivirus software »
We've made some important changes to our Privacy and Cookies Policy and we want you to know what this means for you and your data.I acceptMore information